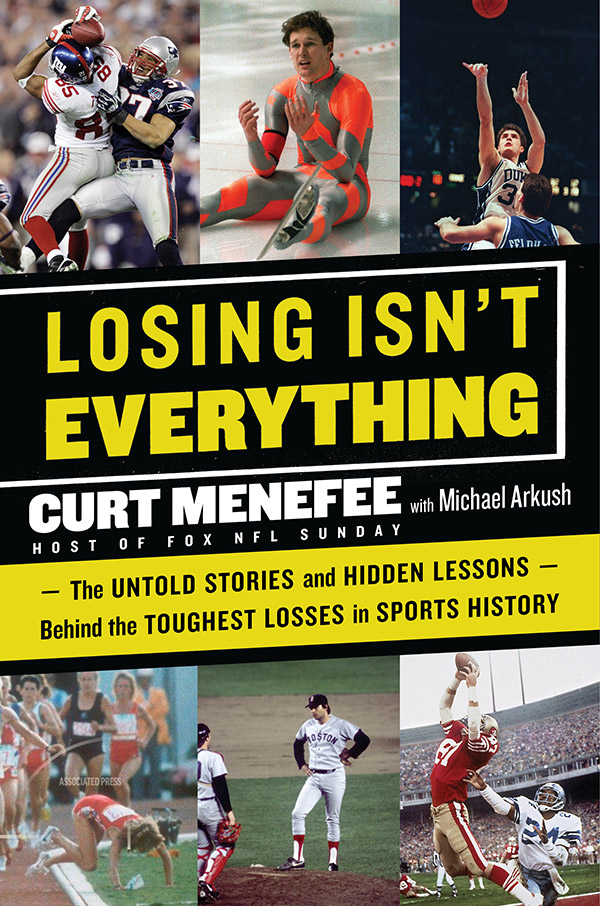 “This book offers a provocative look at both the good and bad sides of the competitive spirit. For all readers.”
- Library Journal

A refreshing and though-provoking look at athletes whose legacies have been reduced to one defining moment of defeat—those on the flip side of an epic triumph—and what their experiences can teach us about competition, life, and the human spirit.

Every sports fan recalls with amazing accuracy a pivotal winning moment involving a favorite team or player—Henry Aaron hitting his 715th home run to pass Babe Ruth; Christian Laettner’s famous buzzer beating shot in the NCAA tournament for Duke. Yet lost are the stories on the other side of these history-making moments, the athletes who experienced not transcendent glory but crushing disappointment: the cornerback who missed the tackle on the big touchdown; the relief pitcher who lost the series; the world-record holding Olympian who fell on the ice.

In Losing Isn’t Everything, famed sportscaster Curt Menefee, joined by bestselling writer Michael Arkush, examines a range of signature "disappointments" from the wide world of sports, interviewing the subject at the heart of each loss and uncovering what it means—months, years, or decades later—to be associated with failure. While history is written by the victorious, Menefee argues that these moments when an athlete has fallen short are equally valuable to sports history, offering deep insights into the individuals who suffered them and about humanity itself.

Telling the losing stories behind such famous moments as the Patriots’ Rodney Harrison guarding the Giants' David Tyree during the "Helmet Catch" in Super Bowl XLII, Mary Decker’s fall in the 1984 Olympic 1500m, and Craig Ehlo who gave up "The Shot" to Michael Jordan in the 1989 NBA playoffs, Menefee examines the legacy of the hardest loses, revealing the unique path that athletes have to walk after they lose on their sport’s biggest stage. Shedding new light some of the most accepted scapegoat stories in the sports cannon, he also revisits both the Baltimore Colts' loss to the Jets in Super Bowl III, as well as the Red Sox loss in the 1986 World Series, showing why, despite years of humiliation, it might not be all Bill Buckner's fault.

Illustrated with sixteen pages of color photos, this considered and compassionate study offers invaluable lessons about pain, resilience, disappointment, remorse, and acceptance that can help us look at our lives and ourselves in a profound new way.

Curt Menefee is the long-time host of Fox NFL Sunday, and was a sports reporter for MSG Network’s Sportsdesk show and the sports anchor for WNYW Fox flagship station in New York.

Michael Arkush is an award-winning sportswriter and has written thirteen books, including The Last Season with Phil Jackson, The Big Fight with Sugar Ray Leonard, "Rush!" the bestselling unauthorized biography of Rush Limbaugh, and Fairways and Dreams. Arkush lives in Oak View, California, with his wife, Pauletta.