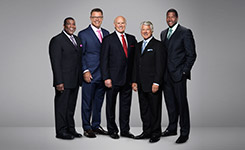 Curt Menefee’s secret to success comes in three steps: you have to work hard, be passionate and enjoy life. Throughout his career, Menefee has achieved all three. After following his passion for sportscasting to major markets like Dallas and New York, Menefee was named the studio host of “FOX NFL Sunday” alongside Terry Bradshaw, Howie Long, Jimmy Johnson and Michael Strahan. Not only is Curt the host of the award-winning and most-watched pregame/halftime show in sports, but “The OT” wrap-up show on FOX which he also hosts was the #4 rated property in all of primetime last year. He also hosts UFC on FOX as well as UEFA Champions League on FOX.

Menefee began his broadcasting career during college, juggling schoolwork with a five-day internship schedule at a local station near his alma mater, Coe College. His hard work paid off as he followed his passion for broadcast sports to Jacksonville, Madison, Des Moines and finally Dallas, where he won four Katie Awards, the Texas equivalent of an Emmy, for Best Sportscast and Best Sports Special. He then achieved success in New York City, where he won an Associated Press Award for Best Sports Reporter in New York and became one of the most popular on-air personalities in the city.

In the time since, he has moved up the ranks, filling roles as a radio host and play-by-play caller for FOX’s NFL and NFL Europe League coverage before moving to his current position in 2006. Menefee has also been the play-by-play announcer for Showtime’s ShoBox: The New Generation, the network’s program focused on most promising prospects in boxing. With additional appearances on MLB, UEFA Champions League, and International Boxing Organization broadcasts, Menefee has amassed a list of credentials rivaling anyone in the industry.

Outside the studio, Menefee has compiled quite the collection of passport stamps, as well. Since graduating from college, he has been to all seven continents, nearly 70 countries, and many of the world’s most famous landmarks. With favorite vacation spots including New Zealand and much of South America, Menefee approaches both his life and his career from a truly global perspective.